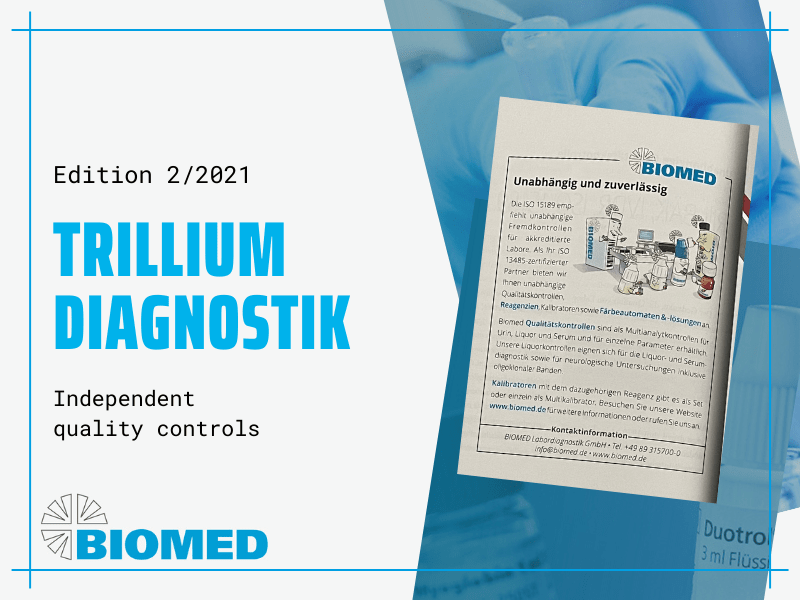 “It all began with the calibration law,” wrote Dr. Gabriele Egert in her article “Independent quality control – Rili-BÄK, IVDR, ISO 15189” in issue 2/2021 of the journal Trillium Diagnostik.

In the calibration law in the “field of medicine, i.e. also in the medical laboratory”, the control criteria for the correct performance of analyses and measurements have been specified since July 1, 1970. In 1971, the practice regulation was defined by the German Medical Association in a guideline, the so-called Rili-BÄK. In 2001, this migrated from the Verification Act to the Medical Devices Act and the Medical Devices Operator Ordinance.

Requirements for the competence of medical laboratories were also regulated globally. In 1999, for example with the ISO/IEC 17025 and ISO 15189, which is based on it. Or the European IVDR Regulation, which came into force in 2017 and regulates the placing on the market of in vitro diagnostic medical devices.

The primary goal of all these regulations is to ensure the quality of measurements for the benefit of the patient. There are internal error limits and weaknesses to be considered. These can be avoided, for example, through the use of independent control material or through external quality assurance, such as participation in interlaboratory tests.

By the way, we, BIOMED Labordiagnostik GmbH, are named as an independent supplier of multiparameter controls for serum, urine and cerebrospinal fluid in Trillium-Diagnostik.

Here you can find the whole article published in German.

back to the news overview